Exhibitaly-Eccellenze italiane d’ oggi, the event dedicated to promoting the best of Italy in Russia is scheduled to run until 6 January 2013, raised the curtain on the fashion system, with the show “NATION OF FASHION”, inaugurated on 7 November 2012 in Moscow, against the evocative backdrop of the archaeological-industrial «Krasny Oktyabr» complex. The evening was hosted by guest of honour and actress Maria Grazia Cucinotta. 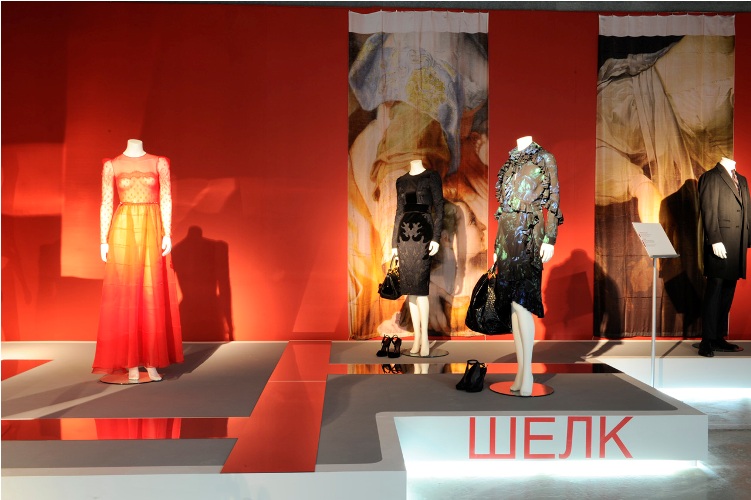 During the first six months of 2012, Google registered a 13% increase in searches related to «Made in Italy». These were the results that emerged from a survey conducted by the American search engine on ten countires (Usa, France, England, Germany, Japan, The Arab Emirates, Brazil, Russia, India and China). Topics with the most hits including cars and fashion, followed by tourism, food, and furnishings: these are the same items proposed at the various dates with  Exhibitaly-Eccellenze italiane d’oggi, where Italy will present the best that it has to offer to the Russian public.

The textiles and clothing sector is possibly the most representative and successful of our “ creative” industry.  The exhibition, “NATION OF FASHION” (7-26 November), is a tribute to the ingenuity and know-how of Italian fashion, both characteristics and qualities that have always been underlying factors of the success of “Made-in-Italy, thus consolidating “that” style and “that” unmistakable aesthetic throughout the world.

The exhibition encompasses clothing and accessories produced by several of Italy’s most important brands, including a few “cult” pieces that testify to the uniqueness of style of each protagonist of Italian fashion. Also on display at the exhibition are several historic creations, made for international stars of the silver screen from the 1950’s to present-day times, including creations by Maison Gattinoni for roles played by Anna Magnani  (Risate di Gioia, directed by Mario Monicelli, 1960), Lana Turner (Imitation of life, directed by Douglas Sirk, 1959) and Ingrid Bergman (Europa 51, directed by Roberto Rossellini, 1952) to dresses made for the episode of the omnibus film, Tre pass nel delirio, directed by Federico Fellini in 1967, to those interpreted by Mina, in her historic live sessions at  Studio Uno in1965, proposed by Fondazione Annamode.

The underlying concept of the exhibition are precious, innovative fabrics, originating from past and present collections, interpreted by world-renowned maisons. In fact, the objective of the exhibition is to enlighten the Russian public about the artistic and creative value of each fabric, ranging from knitwear to yarns right up to techno-materials and those used for accessories. Italian style is showcased thanks to creations by Agnona,Laura Biagiotti, Corneliani, Fendi, Alberta Ferretti, Gucci, Missoni, Ermanno Scervino, Valentino, Versace and Ermenegildo Zegna.

The exhibition does not focus solely on clothing an jewellery. An ad hoc section is also dedicated to footwear. In collaboration with ANCI – Associazione Nazionale Calzaturifici Italiani, the exhibition also celebrates, the tradition of Italian footwear explaining how from the first half of the 20th century Italian Footwear Designers were the forerunners of a design and quality that was so innovative that, even today, they still serve as a source of inspiration for international footwear designers worldwide. The exhibit includes historic creations from museums and private collections that trace the techniques inherent in Italian shoe-making between the 1930s and the 1970s.

Sectors related to innovation and technology will animate the last appointment of Exhibitaly – Eccellenze italiane d’oggi: «TECH ME TO THE FUTURE» (5 December 2012 – 6 January  2013), is an exhibition dedicated to the most popular technologies as well as less well-known ones, the aim being to give an overview of Italian industrial tradition and the direction in which research is heading in several important sectors, in collaboration, among others, with the Istituto italiano di Tecnologia and the Scuola Superiore Sant’Anna in Pisa.